Written together with the fantastic Jenny Sundén, our article, Inappropriate Laughter: Affective Homophily and the Unlikely Comedy of #MeToo, is just out, on open access, as part of Social Media + Society’s special issue on “Affective Body Politics” that I’ve edited with Kaisu Hynnä-Granberg and Mari Lehto. This is also a teaser for our forthcoming book with Jenny, Who’s Laughing Now? Feminist Tactics in Social Media, which should be out and about next autumn with MITP. And here’s the abstract:

This article investigates the affective and ambiguous dynamics of feminist humor as an unexpected strategy of resistance in connection with #MeToo, asking what laughter may do to the sharpness of negative affect of shame and anger driving the movement. Our inquiry comes in three vignettes. First, we deploy Nanette—Hannah Gadsby’s 2018 Netflix success heralded as the comedy of the #MeToo era—arguing that the uniform viral warmth surrounding the show drives the emergence of networked feminisms through “affective homophily,” or a love of feeling the same. With Nanette, the contagious qualities of laughter are tamed by a networked logic of homophily, allowing for intensity while resisting dissent. Our second vignette zooms in on a less known feminist comedian, Lauren Maul, and her online #MeToo musical comedy riffing off on apologies made by male celebrities accused of sexual harassment, rendering the apologies and the men performing them objects of ridicule. Our third example opens up the door to the ambivalence of irony. In considering the unexpected pockets of humor within the #MeToo scandal that ripped apart the prestigious institution of the Swedish Academy, we explore the emergence of carnivalesque comedy and feminist uses of irony in the appropriation of the pussy-bow blouse as an ambiguous feminist symbol. Our examples allow us to argue for the political importance of affective ambiguity, difference, and dissent in contemporary social media feminisms, and to highlight the risk when a movement like #MeToo closes ranks around homogeneous feelings of not only shame and rage, but also love.

Out a year ago, Many Splendored Things is being read by game scholars, which is fantastic. Adding to the thrill, some of them like it. Recent reviews are out from Ashley Darrow for the Manchester Game Studies Network and from Miguel Sicart for a WiderScreen special issue on sex and play. I’m taking Sicart’s definition of this being “one of the most important books on play” as an objective fact. 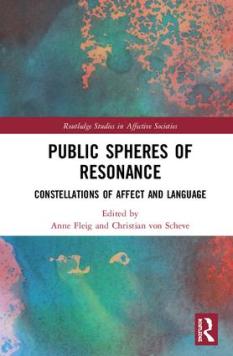 Edited by Anne Fleig and Christian von Scheve, Public Spheres of Resonance: Constellations of Affect and Language, is out with Routledge. It has a fabulous lineup, from Anna Gibbs to Britta Timm Knudsen and Ann Cvetkovich. And me! My contribution is titled “Resonant Networks: On Affect and Social Media” and, well, asks how the concept of resonance may work in studies of social media. This is the intro/abstract:

In an era of clickbait journalism, Twitter storms, and viral social media campaigns varying from social protest to commodity promotion, it has become strikingly clear that networked communications are not merely about critical rational exchange or functional information retrieval, but equally – and perhaps even more explicitly – an issue of affective exchanges and connections of both the fleeting and more lasting kind. As argued in this chapter, the notion of affective resonance provides a means of accounting for encounters with the world in which bodies move from one state to another, and possibly become transformed in the process. This conceptualization is hardly specific to online phenomena as such, and it is used here to explore affective encounters between people, networks, interfaces, apps, devices, digital images, sounds, and texts in the context of social media. Moving from my own considerations of resonance in connection with online pornography to examinations of the role, both pronounced and not, that affect has played in Internet research, this chapter asks how affect matters and makes things matter in a contemporary media landscape driven by the quests for attention, viral circulation, and affective stickiness.

how to do things with affects

Sooner than expected! Out in October, my Many Splendored Things: Thinking Sex and Play has already been reviewed, not once, but twice — apparently with more to follow. Voilà, Katherine Angel for Times Higher Education (behind paywall) and João Florêncio for Theory, Culture & Society. Always a thrill to be read.

pleasures of violence, with tentacles

Should you be in the UK March 7-8, do join us at The Pleasures of Violence conference at Oxford Brookes University: “This conference aims to consider questions of abuse, misuse of power and aggression in the (post-)digital age from a variety of perspectives and fields, exploring the relationship between violence (physical, psychological, symbolic, et al) and digitality writ large. It also takes seriously the pleasures on offer through such digital violence, whether that is the action cinema’s fight sequence or the trainwreck celebrity. Is “digital violence” a redundant category? How does violence play out in different national contexts and creative industries: cinema, gaming, photography, music, fashion?” My contribution addresses tentacle rape porn and some empirical inquiry into pornographic preferences.

the power of vulnerability 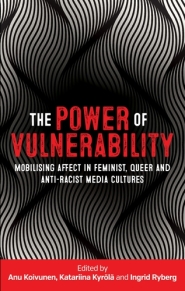 The power of vulnerability interrogates the new language of vulnerability that has emerged in feminist, queer and anti-racist debates about the production, use and meanings of media. The book investigates the historical legacies and contemporary forms and effects of this language. In today’s media culture, traumatic first-person or group narratives have popular currency, mobilising affect from compassion to rage to gain cultural visibility and political advantage. In this context, vulnerability becomes a kind of capital, a resource or an asset that can and has been appropriated for various groups and purposes in public discourses, activism as well as cultural institutions. Thus, politics of representation translates into politics of affect, and the question about whose vulnerability counts as socially and culturally legible and acknowledged. The contributors of the book examine how vulnerability has become a battleground; how affect and vulnerability have turned into a politicised language for not only addressing but also obscuring asymmetries of power; and how media activism and state policies address so-called vulnerable groups. While the contributors investigate the political potential as well as the constraints of vulnerability for feminist, queer and antiracist criticism, they also focus on the forms of agency and participation vulnerability can offer.